The F in farm

Funny Farm was a great project to work on. Produced by Dubit, for Food Zoo Limited, the virtual reality (VR) aspect provided some challenges that we were forced to solve creatively. For the product to perform well in VR we had to produce a distinct art style with minimal information, yet still deliver a strong brand identity.

Farm animals are always a fun set of characters to produce in any style, as they seem to fit into a natural lineup. From the outset we knew the bull had to be the largest and heaviest of our bestiary, so we wanted him to have a powerful, 'macho' look that left you in no doubt he felt he was in charge of the farm. 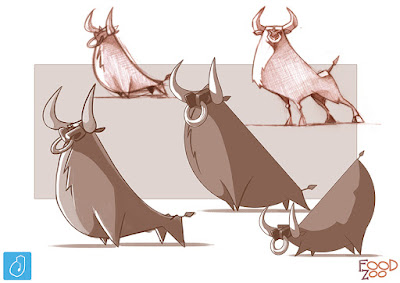 Once we had a shape we were happy with, we used him as a model to produce a selection of characters that were on brand, yet faithful to their real life counterparts.

Despite having a fun bunch of personalities, this group didn't knit together as tightly as they should so we did another pass, trying to push the stylisation even further. We focused on a 'hump' as a template and played with scale and colour, arriving as a collective of simple characters that felt fun and unique.

Once we'd found this form, we then discovered some fun routes for animation to fully embrace this simplicity. 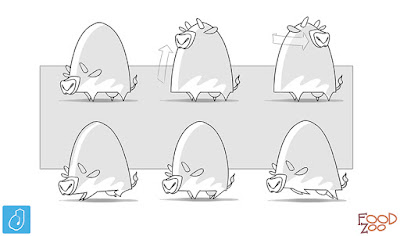 The bee proved far harder to break than it had any right to, but once we realised the bee would primarily be viewed from behind we knew that this was the angle that needed to display our 'hump' shape. Once we made this decision it game us some freedom with the head and thorax which allowed the creative process to flow more easily. 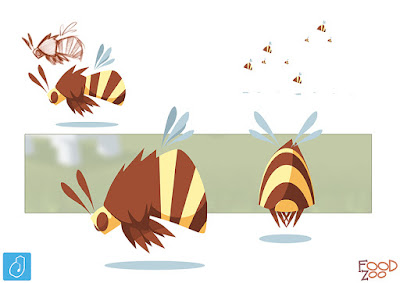 When looking at inspiration for farms it became apparent very quickly that the red and white barns, yellow cornfields, and blues skies of the American mid-west provided a far more pleasant aesthetic, than the grey sky, grey stone, brown mud and rusty corrugated iron of British farms.

Performance was our primary goal here so from the outset we went in confident that we needed to focus on a low poly art style. Rather than trying to disguise this decision we embraced it and crafted all elements of the farm yard to suit this approach. 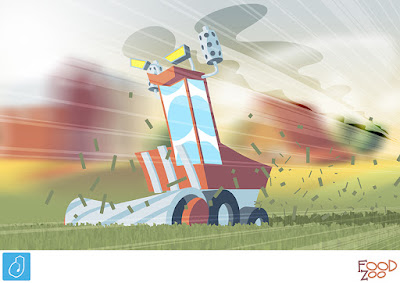 With a final pass to hone the pastel colours and layout of the hub, I produced this piece of art. This, along with the characters, was then modeled in 3D.

The finished product is a lovely looking pair of VR games set on a picture perfect American farm-stead. It's available now at the App Store, and Google Play. If you don't believe me, just watch the trailer.
I hope this wont be our last visit to Funny Farm as there was a whole bunch of ideas left unexplored.

I cant believe I managed this whole post without a farm pun! I deserve a pat on the back.
Posted by Scurf at 14:21